From September 3rd to September 18th 3 students, without prior skills other than the "Home Study Program", built and paddled their own birchbark canoe.


Scroll from left to right to view pictures. Click on any picture to see enlargement. 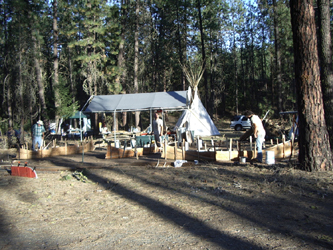 The Site - We were situated less than 100 feet from the bank of the Spokane River, just below 9 Mile Falls. This was within the area of the old N.W. Fur Company Post, The Spokane House. You could feel the history in the area. There was a family of osprey with 2 fledglings in a nest along the river. 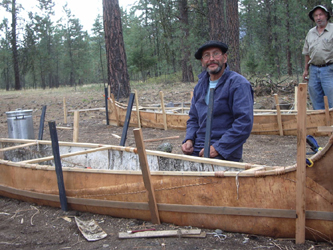 Mayu - Jean-Philippe Mayerat (Mayu) is a wooden boat builder from Lake Geneva, Switzerland. He built his canoe and shipped it back home. Mayu brought cheer to the camp with his French-style accordian music and his Alaskan Amber brand beer. 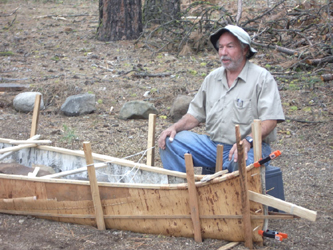 Bill Friday - Bill is from Huntsville, Alabama. A recently retired scientist for the United States Government Bill broke away to live out a long awaited dream.

Mike Dennis and Jay - Mike, originally from New Jersey and currently living in Oregon brought along his good buddy Jay to help him. Jay flew out from northeastern Pennsylvania.

Long Hours - A labor of love, still the days were busy and long and the guys were tired at day's end.

Each Student Built His Canoe on His Own - This included bending all of his ribs free-hand. It was a long day of careful bending and concentration. To cap it off we had an evening of fiddle and accordian music around a blazing fire with bratwurst sausages and beer!

Careful Attention to Detail - High standards were enforced on each student. Each step had to be done to professional standards, not the standards of a first time effort. The result however was a professional quality canoe that each could be very proud of.

The Final Result - Like kids at Christmas the guys hit the water with their new toys. What fun!

Comradarie - Two full weeks of 10 hour days in the dirt. Go ahead and ask these guys if they are willing to sell their canoes.

Mike's Wabanaki Chiman - I guess Mike and Jay had enough kneeling while building. His canoe has basically the same stats as Bill's but with a slightly different sheer and prow design.

Mayu's Oldstyle Canoe - You can see Mayu's skill and creativity as a boat builder in how he did the longitudinal seam. This is a style that was sometimes done with fur trade models. Oh by the way, that is one of the Park Staff in the bow.